THE TWO AT THE PIANO

Young pianist Osin gets in a cancer clinic with a diagnosis of Ewing’s sarcoma, where he meets a girl, Julia, a talented artist. There is sympathy between them and they try to spend together their free time, forgetting about their diagnoses to live as normal young people. But once the disease has appeared, Osin understands that Julia’s condition is getting worse and the medicine here is useless. Believing in the power of music, Osin decides to perform the Rachmaninoff’s [Piano Concerto No. 2] in the clinic, hoping that it could help Julia. 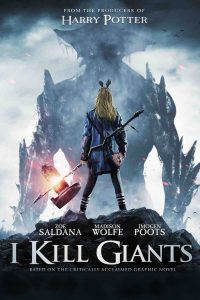 Barbara Thorson is a teenage girl who chooses to escape the realities of school and a drab family life by retreating into her magical world of Titans and Giants. She devotes every moment of time she can in researching all the variations of giants, learning how to lay traps and kill them. Barbara’s giant-hunting is perpetually interrupted by her requirement to attend school, where she is an outcast, seen as a geeky-weirdo. But with the help of her new friend Sophia and her school therapist, Mrs. Molle, Barbara will learn to battle her Giants and face her fears – tackling the mean bullies at school, her sister and her difficult home life.

Gideonette, a timid and visionary girl, lives with her parents in a small town. Her dad Gideon, battles daily to allay her fears about the curse of the Gideon de La Rey. Throughout their family history every Gideon died in a freak accident at a young age. In order to prove everyone wrong, Gideon named his daughter – Gideonette. Although Gideonette has had to endure endless teasing about the curse, her dad has tried to convince her that they’ll both grow old. When he suddenly dies, her worst fears are realized and she retreats into a dark world where her imagination runs wild. Realising that Gideonette needs to get away from the curse her mom sends her to her grandparents. Here Gideonette meets Bhubesi, a deaf boy who’s ‘training’ to become an astronaut. The brave boy wins her trust and they embark on a curious journey of wordless friendship that helps her to realise she can’t hide from death.

“Survival of the fittest” is the philosophy at all boys boarding school Caldermount. If you’re not a champion on the sports field, you’re a nobody. No one knows this better than bookworm Amberson, who’s been at the bottom of the school’s social ladder since he can remember. When the French teacher’s fiery daughter Agnes arrives, Amberson’s life is turned upside down. He suddenly finds himself playing matchmaker for Winchester, the school’s handsome but spectacularly dim school-hero. Winchester definitely has the looks to win over Agnes but it’s Amberson who has the wits. Will our modern Cyrano de Bergerac have the courage to reveal himself to her and stand up for who he really is? 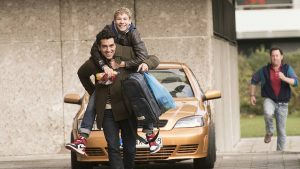 Synopsis
30-ish rich kid Lenny lives in his dad’s villa, squanders his dad’s money and thinks he’s some kind of playboy. 15-year-old David has had a heart condition since birth. No one knows if he’ll live to turn 16. One day David gasps for air in bed in the dull council high-rise where he lives and his mother rushes him to the hospital. There Lenny’s heart specialist dad shanghais his son into taking care of David. David’s world is one of clinics and operating rooms, Lenny’s world is all babes, clubs and parties. To keep it simple for himself, Lenny helps David with the things he wants to experience at least once before it’s too late, the easy stuff: go shopping for cool clothes, steal a car, things like that. A friendship results that’s so serious, so intense, so wild, as if there’s no tomorrow – which may be true.